A relative emails to SMT management –

Whatever financial cuts are required in your business plan: please, not at the expense of staff and the ricochet effects on residents and their friends/family.

Given the current devastating increase in the cost of living and inflation, I would hope that St Monica’s Trust would look after the poorest paid staff who deserve our respect, appreciation and thanks.

“Fight for your jobs”

And wish you all the staff good luck with the strike I’m totally behind you I work in healthcare and I have done agency work at Saint Monica  trust these companies cannot get away with it they bully you and have no respect .. The staff worked very hard there and it’s heavy going if I was not working I would be there with you to support you .you’re doing it for all Health Care staff .. someone’s got  to stand up to these people ..  care staff deserve more money for the work they do … The trust makes millions out of this but can’t pay their workers a decent wage .. good luck to you all .. stand your ground to bullies … I will be thinking of you all ..

“Caring for the carers”

Sending support and solidarity to the staff who sacrificed so much of their own family time and health to support the people they were professionally caring for with apologies that we have such a greedy, profit focussed society!!

Bristol Central Health Unison Branch wishes to send a message of support and solidarity to St Monica’s strikers in their just cause. Our branch represents cleaners, porters, catering staff, admin workers, nurses and other NHS staff in the BRI  and other hospitals in central Bristol.

Your fight is our fight.

Like you, we have worked right through the pandemic and have not been fairly rewarded.

We fully support your fight for fair pay, for no redundancies, no change to terms and conditions and no fire and rehire.

Like you, we believe care staff and NHS pay has been eroded over many years and enough is enough.

We applaud you in your fight for fair wages and for no fire and rehire.

Best wishes for a speedy settlement and for your employer to recognise the justness of your cause.

Hold fast, we are all behind you.

The Bristol Climate Justice Coalition sends a message of support to all the carers and other staff at St Monica’s who are resisting the Trust’s proposals to cut your pay and worsen your conditions of service under the proposed fire and rehire measures.
Our group supports the Green New Deal, which calls for good green jobs in the care economy.This can never be achieved if fire and rehire is used to cut and undermine social care. We appreciate that in taking strike action to defend yourselves you are also defending the standard of care at St Monica’s. We fully support your decision to take strike action.

I am writing to express solidarity from Tower Hamlets UNISON for your dispute.

We will be considering a substantial donation at out next Branch Committee, and we will send it to you as soon after that as possible.

In Tower Hamlets we were also forced to take strike action when our Labour Mayor supported the use of sack and re-engage to impose new contracts at the height of the pandemic. Our willingness to take action meant that the Council’s proposals on our contracts were significantly softened and I am pleased to say that the Mayor who sacked us was sacked by the people of Tower Hamlets in the May elections.

I hope that whoever proposed sacking and reengaging you all suffers the same fate!

Sack and re-engage is always an appalling act. We support Barry Gardiner MP’s campaign to outlaw it. But to use sack and re-engage to impose worse conditions on care workers after all you have done throughout the Covid pandemic is utterly unspeakable and you deserve the support of every Trade Unionist and anyone who genuinely wants a proper care service, where an essential component is workers who are not just clapped, but respected with decent pay, terms, and conditions for the essential work you do.

Solidarity from Tower Hamlets and please let us know of any ways in which we can support you.

I just wanted to send a message of support and solidarity to you now, because I am unable to come to join the picket lines and day of action this week.

I wish you every success in your action and hope that it gets your management to see some sense. Their behaviour is appalling and it is shameful that they have refused to get around the table. 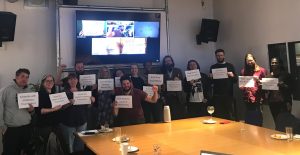 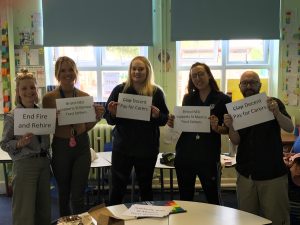 Congratulations and Solidarity for you and your colleagues taking strike action today and the next couple of days in pursuit of your claim against the firing and re-hiring on worse terms and conditions…don’t we wish we could do that to some MPs!

If ever there was a time for people to stand up and say No More! Then this is it. I remember in the SouthWest you recently had a dispute against fire and re-hire involving the union Community I seem to remember? Whatever it was, they won and if you fight long and hard enough I’m sure you will too. No one in their right minds can think what’s happening to you is anything other than disgraceful.

I am writing to express my support for your determined stand against an employer using of “fire and rehire” tactics. Such attacks on pay, terms and conditions have become increasingly widespread, but are especially shocking in the social care sector. Shame on the Trust.

I’m very glad that I’m in a position to donate to your hardship fund! Best wishes for strongly supported action and a swift victory that secures all current elements in the workers’ employment contracts.

Ultimately, of course, there has to be a radical restructure of social care, ensuring that it is properly funded and free from the point of need, with the profit removed once and for all.

Wishing you all the best in your fight for fair pay and work practices. All fire and rehire should be outlawed with severe penalties for those who still abuse workers (P&O are a disgrace and should be boycotted by anyone who cares for human rights). This should be a priority for the next Labour government along with repeal of all anti union laws, although they will need to be forced by conference to agree with this as well as urgent reform of how we elect the government.

I’m hopeful that the tide is turning and workers can see the only way to defend their rights and pay is by strength in the workplace, by joining a union and organising.

Thanks for standing against bad employers,

Hi I’m part of PONHS and wish to say that I support your strike.

Watch Mick Lynch, when interviewed ,he calmly makes sure everyone gets the message, the workers are all affected by the Tory cuts, austerity and the huge profits made by the people in charged, we’ve had enough!

I am a  registered nurse living down in Cornwall and wanted to express my solidarity and support to you on your fight against an employer who is trying to worsen your terms and conditions. If I lived closer I would come to your pickets but unfortunately I am too far so will be waving you on from here.

After all you do day in day out to look after and care for people in our communities it is disgraceful how you are being treated. I really value and appreciate the work you do, you should be paid so much more.

You have my unwavering support in taking industrial action. Remember what is bad for staff is bad for patients so not only are you standing up for yourselves but patient care too.

Mick Lynch of the @RMTunion gives his support to @unisontheunion care workers on strike in St Monica’s Trust.

The media has tried to pit rail and care workers against each other – but it’s the same fight.#StMonicaStrike pic.twitter.com/nPhzyT0MvE

@nsunison @BristolUnison @UNISONSW @unisontheunion We send solidarity with the #StMonicaStrike from Salford. Here is a short video of our branch Black Members Officer and @NorthWestUNISON NEC rep Julia Mwaluke in support of your struggle ✊🏿✊🏻✊🏽 pic.twitter.com/GjyXk4mbiI

Solidarity #StMonicaStrike ✊
Faced similar in Doncaster and took 90days strike action when TUPEd from the NHS to Care UK…A case of sign up or out of a job..should be illegal. https://t.co/oikT7OAZhH

Incredible to have Barry’s support, particularly when he is campaigning so passionately to end ‘fire and rehire’ tactics.#StMonicaStrike pic.twitter.com/pw1b3fOA4D

“Many in the media have tried to pit care workers against rail workers, teachers against nurses…

Incredible to have Barry's support, particularly when he is campaigning so passionately to end 'fire and rehire' tactics.#StMonicaStrike pic.twitter.com/pw1b3fOA4D

On Wednesday lunchtime last week, for 20 short minutes I joined the striking and picketing care workers from St Monica Trust, Sandford as they stood on the roadside and waved & cheered at passing traffic, as car after van after lorry hooted back and gave their support to these beleaguered workers. I was astonished to find how moving this was. They told me how these small local businesses were particularly supportive, when maybe some years ago, this would not have been the case

. We are all now feeling the horrendous effects of policies that have been building for years.

I came home inspired by the St Monica Trust care workers and by the workers in their vans who wanted to show their solidarity that rainy afternoon, so I painted a picture that I hope shows that collective solidarity. I attach it here, and I would be most grateful if you could forward it on to your colleagues at St Monica’s Sandford. (I don’t do any social media like Facebook or Instagram, so this was the only way of getting it to them that I could think of).

Thank you so much and very good luck and best wishes to you all.