Why is UNISON balloting for strike action?

The local government employers have made a final offer of 1.75% from 1 April 2021 (2.75% for those on pay point 1). UNISON members have voted overwhelmingly to reject this offer. The employers have refused to increase their offer and so members must now consider their last resort to demand a better deal. The offer is well below inflation which means another real-terms pay cut for hard working staff. Your pay is now worth 25% less than in 2010 thanks to repeatedly low increases. UNISON says enough is enough.

What was the full offer?

The final offer would provide:

Who is being balloted?

Most members working in councils and schools in England, Wales and Northern Ireland (Scotland has its own pay negotiating body). If you receive a ballot paper from UNISON, we believe you are eligible to vote and eligible to take strike action.

When is it happening?

14 January 2022: We need to receive your ballot paper by this date

What questions are on the ballot?

How do I vote?

You will receive a ballot paper, a return envelope and some additional material explaining UNISON’s recommendation to members. The ballot paper asks members if they are prepared to take part in strike action. You should put a cross in the box against your choice on the ballot paper. This must be returned to CES (who are running the ballot on UNISON’s behalf) by 14 January 2022. A freepost return envelope is included with your ballot paper 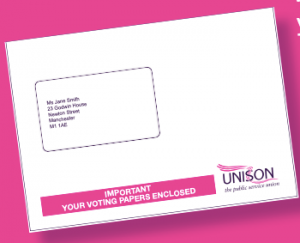 Can I vote online?

No. The law does not allow for electronic voting in these types of ballots.

How should I vote?

We know going on strike is not something you do lightly. Your job is incredibly important, and people rely on you. But your employer has made you, and other council and school workers, an unfair offer.

1.75% might sound like it’s better than nothing – but with inflation well above 4.5%, it’s a real terms pay cut. This year, every pound in your pay packet will really count.

It comes after a decade of declining pay. The value of your pay is now 25% lower than it was in 2010! Year after year, it’s been chipped away.

Unless we say ‘enough!’, your pay will fall further, and those holding the purse strings will get away with it. It’s time to take action.

There are numbers on the ballot paper. Does this mean you can see the way I have voted?

The numbers on the ballot paper are placed there by the independent scrutineer CES. They are there to ensure the ballot is secure and to prevent people voting more than once. UNISON has no access to the numbers or anything relating to them. Your vote is secret UNISON cannot find out haw somebody voted.

Why is UNISON balloting for strike action, shouldn’t we be negotiating with employers?

We continue to try and negotiate with local government employers. After announcing plans for a strike ballot, UNISON and other unions have continued speaking and meeting with employers. But at every opportunity they have refused to budge. Even knowing that we are balloting for strike action they insist 1.75% is their final offer.

Are the other unions balloting?

GMB and Unite are also balloting their members and recommending strike action.

Will I get paid if there’s a strike?

Most employers will not pay you when you are participating in strike action. You don’t have a right to be paid for days you are on strike

Can I be fired/disciplined for going on strike?

You cannot be dismissed for taking part in ‘protected industrial action’. By lawfully balloting our members we make sure that you can take part in action without fear for your job. You’re also protected from any other negative treatment by your employer that happens as a result of the strike.

Why didn’t I receive my ballot?

What is the ‘Green Book’?

Can I choose not to take part in the strike?

You don’t have to take part in industrial action if you don’t want to (even if the majority voted in favour). Working while others are on strike undermines your colleagues who are making a sacrifice to demand better conditions for all of you and is against the spirit of the union. You and your workmates rely on each other, so we strongly encourage members not to cross picket lines, but it is ultimately your decision to make.

How many days will we strike for?

If members vote to take strike action and we get a turnout of 50% or more, our aim would be to hold an initial day of strike action. But we think we’re likely to need to take further action in order to secure an improved pay offer.